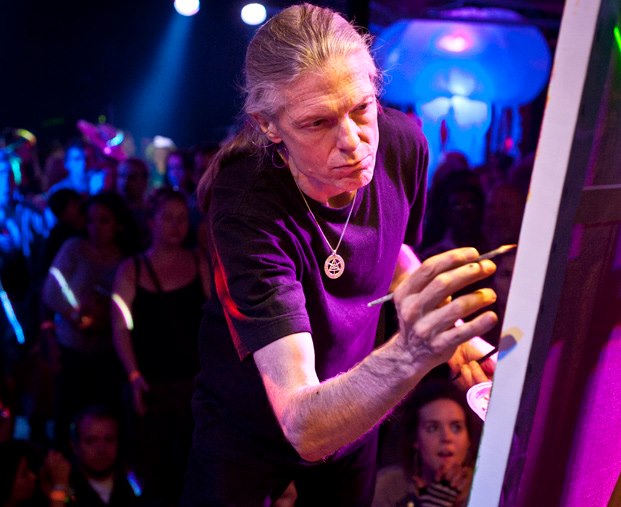 Recently Alex & Allyson were interviewed by Vice magazine for a piece on the CoSM project.

Link to full article with pics:

The first time I met Alex Grey, the visionary artist best known for his TOOL album covers, he told me: “I put the cult in culture.”

He also asked me if I wanted to take the red or blue pill (it was a joke). Then we did a secret handshake.

In 2004 Alex and his wife, Allyson, founded what might be the most unconventional church in all of New York – the Chapel of Sacred Mirrors. The church moved to upstate New York a few years later, and they host full moon ceremonies with fire circles and the Crystal Method, show a lot of trippy art, and are erecting a second building, the Entheon, to be completed in 2013. The church is run through donations, and Alex and Allyson take no salaries. They also welcome volunteers.

It all happens in Wappinger Falls, NY, an hour-and-a-half drive north of NYC. I spoke with the artists and church co-founders about entheogens, psilocybin, and cosmic creativity as a spiritual practice. Apparently, it all started with a vision (and some MDMA).

VICE: Some people are Christian, Buddhist, Hindu, Jewish (among other religions). Meanwhile, some believe in Universal Love as their core principle of spirituality. Do you consider yourself religious people?
Alex Grey: Love is God's secret name. I grew up Methodist and went to church until my parents gave up on religion when I was nine. Allyson grew up Jewish and continues to practice to some degree. I have been a scholar of all religions, particularly Buddhism, for the past 25 years. We meditate. We are both approved ministers who counsel people regarding their spiritual and creative lives, officiate weddings, baby blessings, and attend to those grieving. Art is our spiritual path and ministry. Religion comes from the word "re" or again and "ligare" meaning to bind or tie back. The purpose of religion is to unite the self with God or the creative force. Music, sacred spaces, and meaningful icons are the way we conjoin our minds with the transcendental.

Allyson, you came up with the name Chapel of Sacred Mirrors, although the vision was conceived of by you and Alex in either 1984 or 1986 when you envisioned building a chapel together. How did this happen? I would love to hear the story.
Allyson: The Sacred Mirrors series was inspired by a performance we created together in 1978 titled, “Life Energy.” The event consisted of various experiments to stimulate awareness of our vital forces. As part of the piece, Alex drew simple life-sized charts of Western and Eastern concepts of the body, one of the nervous system and another portraying the acupuncture meridians and points, chakras, and auras—the subtle energy system. The audience was invited to stand before them and reflect on their own anatomy and auric fields. Based on the success of the charts, I recommended creating detailed paintings that invited the viewer to “mirror” and identify with a comprehensive map of body, mind and spirit.

I then titled the series Sacred Mirrors. With figures painted in an ideal and healthy form, the artwork can be used for healing and transformative contemplation. After Alex worked for years creating the series a collector, Marshall Frankel, offered to purchase the Sacred Mirrors. He also gave us our first tablets of MDMA, which changed our lives forever. On our journey, lying in bed, in silence, a simultaneous vision of the Chapel crystalized. Alex also envisioned elaborate philosophical frames for the art, pictorializing the evolution of consciousness. On this inner journey, a voice and vision told us that the Sacred Mirrors and other precious works should not be sold and that a Chapel of Sacred Mirrors must be built to share the collection. This insight gave our lives a mission. Working collaboratively, we sculpted and cast all 21 frames in the basement of our loft building in Brooklyn. The entire Sacred Mirrors series of 19 paintings and two etched mirrors was completed in 1986 for a major installation at the New Museum in New York City followed by exhibits throughout the US.

What makes it a chapel and not just a gallery?
Alex: A chapel is a place of prayer or worship and may house sacred art. A gallery is a commercial space to accommodate exhibits, spectators, and is often associated with the selling of art as a commodity. Chapels, indeed most sacred sites, include paintings, stained glass, mosaic, carving, aesthetic architecture, and are designed to be welcoming to the spiritual pilgrim. The intention of building CoSM and Entheon, is to inspire an experience of the divine through contemplation of visionary art. CoSM became a church in 2008. The artwork points to the light body of the universal human, an integral worldview, so we founded a trans-denominational sacred space that integrates the insights of science, and features creativity as a spiritual practice. 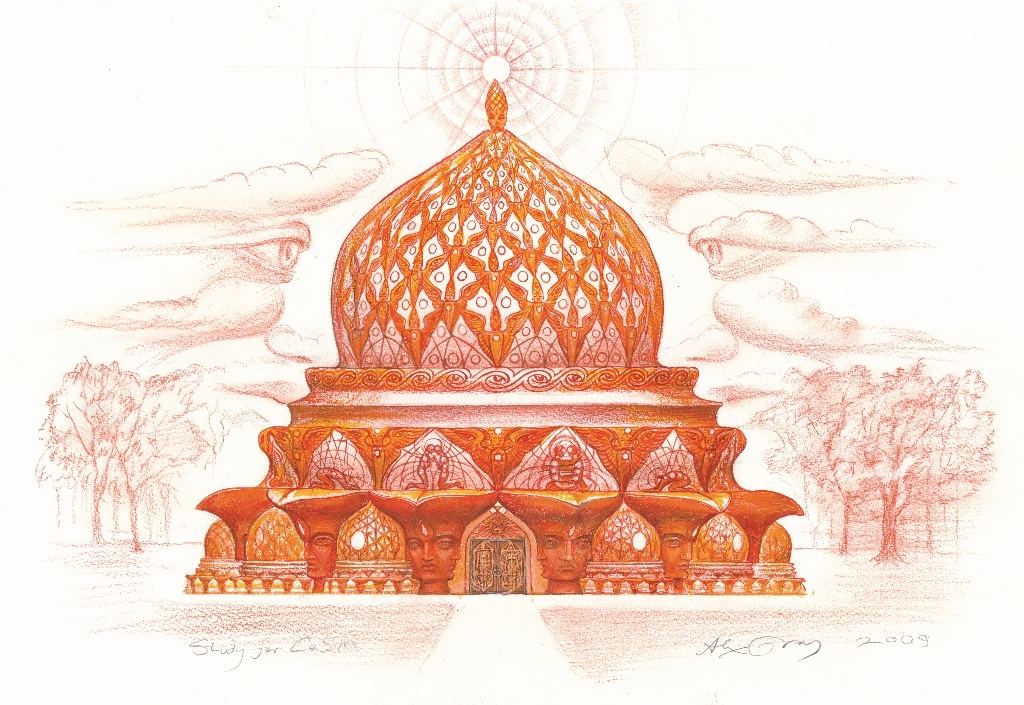 Architecture study of the Chapel of Sacred Mirrors by Alex Grey

What kind of spiritual ceremonies go on at CoSM?
Alex: For over eight years, CoSM has held an unbroken chain of Full Moon ceremonies which consist of wisdom, poetry, music, interactive experiences and sharing. Following the ceremony there is a fire circle, a collaborative art experience, sometimes drumming and ecstatic dance. CoSM holds monthly Art Church on Sunday afternoon, where we create together and discuss art as a spiritual path followed by author’s talks, spiritual films, and inspiring musicians. The Equinoxes, Solstices, Halloween, and New Year are celebrated also at CoSM with ecstatic dance and music, fire spinning and general merriment. There is always an opening discussion. Paul Stamets just spoke at the Autumnal Equinox on Ways that Mushrooms Can Save the World, one of the most popular TED talks on record and a very stimulating program. Programs end with a closing ceremony including baying at the moon.

Couples have gotten married at your chapel. Was that the initial plan for the space?
Alex:The initial plan was to create a sacred space of visionary art to serve and uplift the community. We weren't sure what would happen. People started asking us to perform the marriages at the Chapel.

What is the CoSM campus? What did it used to be?
Alex: CoSM lives on land that was once inhabited by Wappinger native people. Four-hundred years ago, around the time of Henry Hudson, the river 1500 feet from our entrance, was called the "MoHeKanniTuck" -- the river that flows both ways. The Hudson is a tidal river that changes directions every six hours, flowing in from the sea, past Manhattan to the Hudson Valley and back. The Wappinger people suffered genocide, were exiled to the Trail of Tears, and are no more. The Wappinger are remembered by the name of our town, and we built a memorial in their honor at the entrance of our property.

CoSM purchased the property in 2008 with six buildings and a barn. Our builders completely renovated the Victorian house upgrading every room including eleven bathrooms, an exquisite library, parlor, cafe, store, dining hall and commercial kitchen. Our builders completely renovated the office, a house built in the 70's, which now facilitates administrative needs such as shipping, media, programs, etc.  On the footprint of a log cabin, a studio was built where art is made to help support CoSM. Our apartment is in the studio which also functions as a classroom for the annual seven-day summer Painting Intensive and the September Mission of Art Workshop.

Alex, you are you are currently working on a book. What is the book about and how does it relate to CoSM?
Alex: Net of Being has just been released this season. Allyson worked with me on every part of the book, so she shares a credit.  The book is about how visionary art is transforming the cultural body through icons of interconnectedness. There are spectacular photos of collaborations with the cult band TOOL. My painting Net of Being--inspired by a blazing vision of an infinite grid of Godheads during an ayahuasca journey--has reached millions as the cover and interior of the band TOOL’s Grammy award–winning triple-platinum album, 10,000 Days. Net of Being is one of many images I've created that have resulted in a chain reaction of uses--from apparel and jewellery to tattoos and music videos--embedding these iconic works into our culture’s living Net of Being.

Do some people think or believe you have created your own religion?
Alex: Scholar of world history, Arnold Toynbee, considered the world's authority on civilizations, wrote about the rise and fall of twenty-seven civilizations. At the end of his career, he came to the unconventional conclusion that civilizations exist to give birth to better religions.  Toynbee proposed that civilizations are formed around a mystic core, a set of beliefs at the center of that civilization. When a culture wanders from the central tenets it begins to collapse. So, what is the mystic core of the coming planetary civilization, one that honors all people without borders or bias? What religion embraces the unity of all people as a holy family no matter what race, religion, gender, that humanity is one? The actions we take in the world can lead to exploitation and instability or harmony and sustainability. We see many world cultures breaking down and no single religion can be correct for everyone. A planetary religion must honor all paths to the divine, including sacramental paths. Our observations are that creativity in service to the divine is one of the most important and uniting elements of every world religion.  We say God is the divine artist and the Cosmos the evolving masterpiece we co-create.

What kind of role do drugs play in visionary art?
Alex: There is an important connection between entheogens and the visionary art movement.  In 2006, the journal, Psychopharmacology, published Roland Griffiths important psilocybin study showing that 65 percent of spiritually inclined people who take a single dose of psilocybin in a conducive setting will have a mystical experience of unity with the divine. This is a repeatable means of accessing the mystical visionary state and implies that the more sacramental journeys are taken, the more visionary experiences will result in creative expressions of this life-defining experience.

The chapel is funded by your foundation, a non-profit charity since 1996. Who is donating?
Alex: A church since 2008, CoSM (Chapel of Sacred Mirrors) is funded by donations from all over the planet by sales of beautiful art, books, and objects and by guests of CoSM's guest house, rentals of the facility, and by event attendees. Our appearance fees and all proceeds from our work go toward supporting this extraordinary public offering. We, the co-founders, do not take a salary and have given virtually everything we have to this project. Still we need help.

What do volunteers do at CoSM?
Allyson: Many volunteers and regular staff members work in a variety of specialties including, grounds work, office work, shipping, media and program production. To volunteer at CoSM, contact [email protected]