An Interview with Alex Grey


You have chosen "art as a spiritual path." Did this decision represent a benefit for you, or is it a kind of sacrifice? Perhaps both options have a certain proportion of truth...

Alex Grey: The artist's path represents the oldest evidence of human creation.  If art is our religion it means that we are connected with ALL religions.  From shamanic cave art to every ancient civilization, sculpture, painting and architecture express and reveal archetypal deities of world traditions -- theophanies in material form.  We witness the evolution of human consciousness through successive waves of world cultures.

If ones intention is to become closer to God, there is no sacrifice too great in that seeking.  Allyson and I are risking our lives focusing all of our energy on building the Chapel of Sacred Mirrors. Art as a spiritual path has certainly benefitted us.  This work has allowed us to meet like-minded visionaries all over the world who share similar conscious dreams. 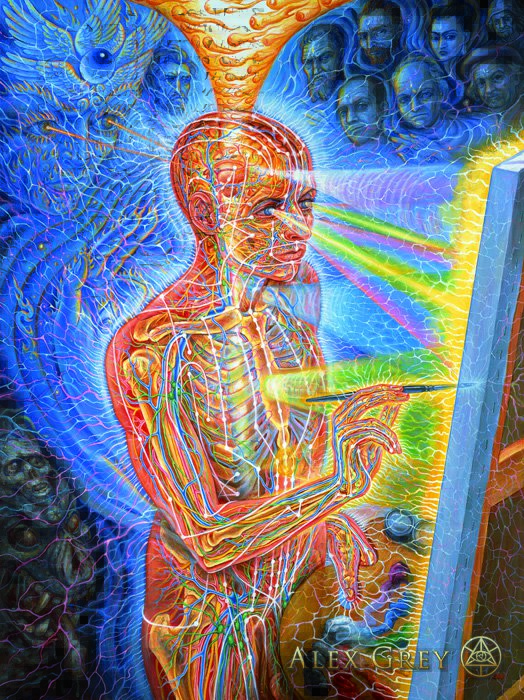 When do you have your "visions"? Do they come frequently? Do you have to perform rituals, or are they a part of your daily life?

Alex: Visions come in all kinds of ways.  The World Soul sculpture, which took, two years to complete came from a vision I had while waiting for a subway.  The painting "Gaia" came to me fully blown while driving over the Brooklyn Bridge the day our daughter was born. Some of most beloved paintings, like "Theologue," "Universal Mind Lattice" and "Net of Being," were inspired while using psychedelic sacraments.  A voice at dawn wakes me from time to time with a message for which I take dictation.  They are the "Art Psalms" and became a well loved book.  We do "vision practices" that Allyson and I will be teaching in our workshop in Buenos Aires on Saturday, May 21st.  These mental visual exercises can trigger flashes of meaningful symbolism that can be expressed through art and potentially resonate with others.

Seems that you are a very perceptive guy. Tell me, if possible, what you felt when you first met Allyson.

Alex: When I first laid eyes on Allyson in art school, she was radiant and in her glory and I was very impressed, but she was the unattainable because I was the troll. After we had our first date, Allyson redeemed me from being an existential nihilist by being divine love in the flesh.  If it had ended after even one encounter, it would have changed my life because I had experienced that love and happiness was possible. Allyson is my muse and the inspiration for the Sacred Mirrors series, which she also named.  Our love is the foundation of the Chapel of Sacred Mirrors, because without our relationship, the body of my artwork that people care about would never have existed.

And what did you feel when you stood in front of Jim Morrison?

Alex: That never happened. We did get to meet the Dalai Lama and being in his presence was like meeting the most ancient dear friend that anyone ever had.

Don't you think the psychedelic movement has been somehow "trapped" by the system? What would be the way to avoid that trap?

Alex: The proper context for "entheogens" is a sacred ritual as it has been done by our human ancestors for thousands of years and maybe since the beginning of humankind.  Current theories regarding cave art attribute the inspiration as coming from psychedelic use.  At the cradle of Eastern and Western civilizations we find the use of mind altering sacraments enabling the aspirant to make contact with the Divine.  The Rig Veda, a sacred Hindu text over six thousand years old, describes Soma, a plant that induced theophanies.  The ancient Greek Eleusinian Mystery Cult used the Kykeon, a mind altering brew, for visiting the Gods. 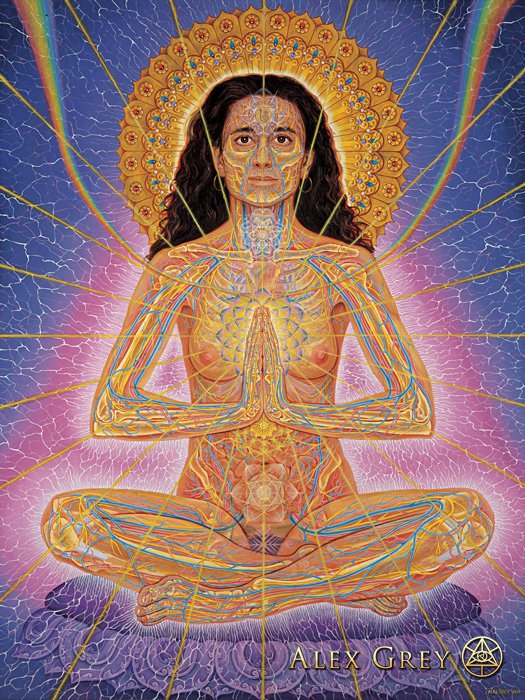 All over the world, psychedelics have been demonized, outlawed and lumped together with harmful addictive substances.  Psychedelics are neither addictive nor toxic.  We need to continue to demonstrate the medical effectiveness of these psycho-spiritual tools for healing and for the betterment of well people.  Within the current system, numerous psychedelic research studies are occurring all over the world.  There is a resurgence of interest  at some of the most prestigious university medical schools -- Johns Hopkins, Harvard, New York University, Stanford and others. Some of the most promising studies include MDMA (Ecstasy) in the treatment of Post Traumatic Stress Disorder for returning Iraqi war veterans.  LSD has been found to be an effective treatment of debilitating cluster headaches (migraines).  In fact, a psilocybin study researching the  mystical experiences, research first done in the mid-60's called the "Good Friday Experiment," was recently replicated at Johns Hopkins University, finding that over 65% of spiritually inclined subjects in a supportive set and setting, report a full-blown mystical experience -- a oneness with God, transcendence of time and space -- after a single psilocybin "journey."  How many world religions, all based on the mystical visionary experience, can claim contact with the Divine guaranteed for 65% of congregants after a single worship ritual.

This article will surely be read by people who do not have frequent contact with galleries or paintings. Why do you recommend an awareness of art? Are there other paths to liberation?

Alex: Art is direct communication, manifest evidence of an inner world.  We're all artists of our own consciousness creating a picture of reality with our minds.  The creative force runs through us all.  That is what God IS.  Creativity,  is a health factor associated with the vitality and expression of the soul.  The way we see our world and express ourselves, the way we dress and wear our hair, are elements of everyday life that demand creative choices.

Liberation can be achieved through prayer, turning within and relinquishing worldly things.  Liberation can be realized through a near death experience.  It is said that Zen was initiated when the Buddha held up a single flower and one of his disciples was instantaneously enlightened.   This spontaneous awakening is called Liberation Through Seeing.  Divine Truth radiates through beauty itself. 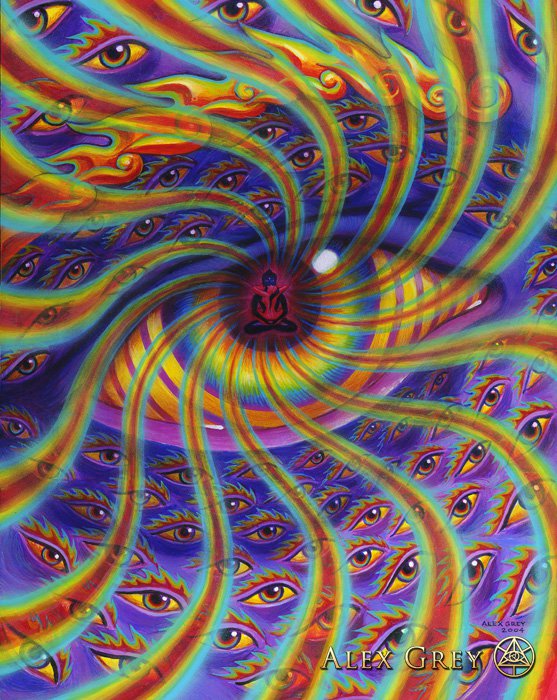 One of the possible lessons to take from the Chapel of Sacred Mirrors is that we are all interconnected. Sometimes, it seems that those connections are increasing due to technology. But are we really making progress, or is it an illusion?

Alex: Evolution is not an illusion. Technology is in an accelerated developmental phase and we see exponential growth on the horizon.  There are some terrible consequences associated with technology and some so valuable and useful.  As humanity struggles toward planetary civilization, we are at a critical juncture in history, awakening to our interconnectedness as we are complicit in destroying the web of life.  Creativity must be our focus if technology is to be used to care for and repair the beauty of nature. Technological development guided by the classic principles of goodness, truth and beauty could facilitate our long-time survival.
Visit: Chapel of Sacred Mirrors
46 Deer Hill Rd
Wappinger, NY 12590 USA
Phone: (845) 297-2323