Progress of the Soul› 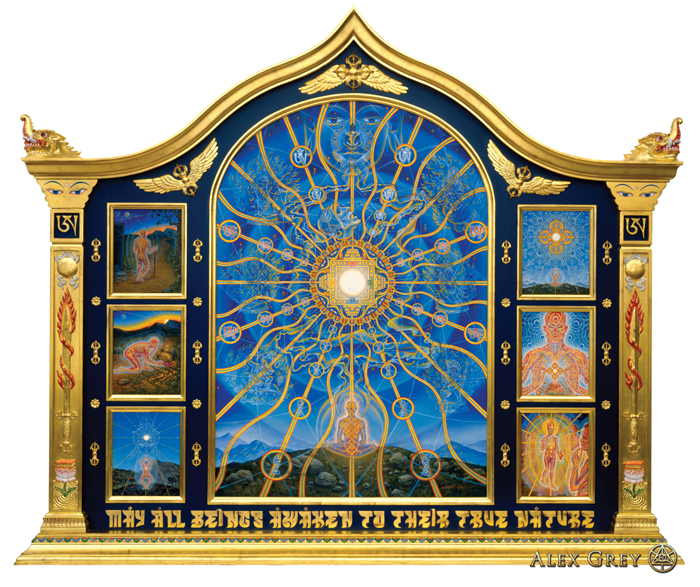 1996, seven oil paintings on wood with sculpted gold leaf frame, 78 x 68 in.
One morning, a series of seven visions flashed into my mind. As soon as I drew one image, another replaced it until I had drawn a complex seven-stage journey of a wanderer discovering the spiritual path, having an introduction to his own true nature, embodying that truth, and reentering society.

I spent the next year painting each scene and sculpted an unusual frame to hold the paintings. As I was working on the painting, a poem related to each panel came through me. The finished altarpiece, Nature of Mind, is my homage to the artists and wisdom masters of Tibet. The Tibetan Buddhist teachings known as Dzogchen were the inspiration for these visions.

In Dzogchen texts various symbols distinguish between the conceptual dualistic “mind” and the self-liberated, non dual “nature of mind”. The thoughts of the dualistic judging mind are symbolized as clouds that arise and dissolve in the open vastness of the skylike nature of mind. The mirror is also a potent tool for illustrating this distinction. The mirror reflects all things, beautiful or horrible, and the dualistic mind gets caught up in the reflections, judging what it likes and dislikes, becoming emotionally charged about relatively inconsequential matters. The Dzogchen teachings advise us not to identify with the passing reflections but to recognize that our true nature of mind is the mirror’s infinite capacity for reflection.

There are numerous vajra symbols throughout the various panels of the Nature of Mind painting, and in the frame surrounding the images the vajra motif is found sometimes in winged guises. In Tibetan Buddhism, vajra (also called Dorje) carries the association of transformative spiritual knowledge and is a symbol of the mind’s true essence. Other sculptural details on the frame include Manjushri’s sword of discriminating wisdom hovering above a sacred text that is emerging from a lotus. The lotus is a symbol of transformation because it begins life in the mucky underwater mud and grows up toward the light, opening as a beautiful pure white blossom. The Melong, or circular mirror, at the top of the frame pillar is a Dzogchen symbol of the ability to distinguish between the conceptual mind and the true nature of mind. The Tibetan syllable Ah is used as a mantra symbolizing primordial perfection; it is found both on the frame and in the second painted panel, on a book cover held by the dead yogi. The dragon like beings sculpted on the right and left sides of the frame are hybrid guardians called makaras with attributes of elephants and crocodiles. “
← Blessing Hand
Nature of Mind panel I →