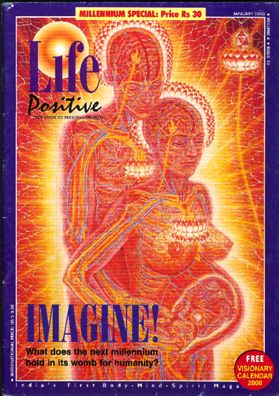 Intro: In Alex Grey's paintings, the body, mind and spirit blend in an ecstatic ascension to Godhood. It is a "crystallised hallucination".

Cosmic grids criss-cross in piercing shafts of light. The body, shorn of its covering, reveals a complex lattice of energy filaments, connecting the macrocosm to the microcosm. The sleeping serpent awakens from its centuries of stupor, uncoils and begins to rise. Time, space and eternity converge into a multidimensional equilibrium. The soul, purified in the fire of awareness, ascends to meet God.

The impact is immediate. As you stand before each life-size painting of New York-based artist Alex Grey, you are forced to confront yourself in your totality. From a fragmented, sandblasted mirror that breaks your body into its varied chemical components, to a spiritually-charged image of the human godhead, the paintings demand you to face the grossest to the most sublime aspect of your being. "These are transcultural, hybrid, mystical images," explains Grey in his book Sacred Mirrors. "I believe there is a superconscious realm of archetypes from which all sacred imagery arises. The job of the visionary artist is to experience higher spiritual states and to bring this experience, in the form of energy and imagery, to his art."

True to his purpose, Grey imbues his work with an unqualified intensity, an excruciatingly detailed craftsmanship that takes off from striking anatomical illustrations to that which connects man to God.

Perhaps the feeling can only be experienced when you actually stand before one of Grey's paintings. They demand you to look within, to get under your skin, literally, and study yourself. From the muscular system to the lymphatic system to the psychic energy system and the universal energy, you have your body-mind-spirit bared before you, exposed to the elements in their vulnerability and splendour.

In many ways, the paintings from the Sacred Mirrors series show a kind of personal apotheosis in Grey's art. The beginning, however, was not so elevating.

Grey learnt the ropes through his father, a professional graphic artist. The angst, pathos and disillusionment of Vietnam, Watergate, Nietzsche and the psychedelic movement reflected in Grey's earlier work. This was also the time when Grey was involved with live, thematic performances that ranged from the gory to the transcendental.

In the latter half of the '70s, Grey became an embalmer and a preparator at a morgue where his job often involved dissection and dismembering of corpses. This explains the accurate understanding of anatomy in Grey's paintings. Some of his most provocative performances at this time were Deep Freeze, in which he shut himself in a freezer full of corpses, and Life, Death and God, in which he suspended himself upside down on the left side of the drawing of a crucifix tacked to a wall, while on the other side, his foot was tied in counterbalance to that of a hollowed-out corpse. He even visited the North Magnetic pole where earth's magnetic lines converge, undressed and ran around in circles. "In that sublime minimalistic frozen tundra," writes Carlo McCormick in Sacred Mirrors, "Grey's performance induced a primal out-of-body trance state within himself, during which he experienced the sensation of slowly dissolving into a pure energy source and becoming one with our planet's innate dynamic frequency."

Violating the sanctity of corpses, however, soon led to a series of dramatic nightmares that brought Grey to a crisis of conscience, forcing him to re-evaluate his position as an artist and as a human being. The result was the Sacred Mirrors series of paintings whose genesis also had at its core an intense psychedelic experience that Grey shared with his wife Allyson.
"Our shared consciousness," Grey describes the vision in Sacred Mirrors, "no longer identified with or limited by our physical bodies, was moving at tremendous speed through an inner universe of fantastic chains of imagery, infinitely multiplying in parallel mirrors. At a superorgasmic pitch of speed and bliss, we became individual fountains and drains of Light, interlocked with an infinite omni-directional network of fountains and drains composed of and circulating brilliant iridescent love energy. We were the Light, and the Light was God." They later called this vision the Universal Mind Lattice.

"These paintings portray the emergence of a style reflecting bio-energised spiritual anatomy that has predominated most of his paintings," writes McCormick. So you have Praying, the bust of a man with the heart, the lungs, the bones and the circulatory system in clear view where, shorn of skin, the eyeball peeps out of closed eyes. But what strikes you here is the inherent power and peace portrayed in the figure, set off by the blinding spiritual light forming a penumbra around the praying man's head.

Or take Avalokitesvara. Here, this image from Tibetan Buddhism is shown with three aspects of the Buddha: Nirmanakaya (the physical world), Sambhogakaya (the Green Tara, Avalokitesvaraís consort) and Vajrabhairava. Somewhat similar is the painting of Sophia who, according to Hypostasis of the Archons, the Gnostic text, pre-existed and gave birth to the male godhead. "In Sophia," explains Grey, "infinite vision and wisdom are united." Symbolic of the two aspects of her being, on one side sits the goddess in her mother-like nurturing form, on the other is Kali in all her ruthless power.

In the paintings that came after the Sacred Mirrors series, Grey presented various aspects of life, such as feeding, kissing, copulating or pregnancy, from the perspective of the energy system. Here, interlocking grids of light show how the human psychic energy system functions in various intense circumstances. "I wanted my paintings," explains Grey, "to visually chart the spectrum of consciousness from material perception to spiritual insight; and to function, if possible, as symbolic portals to the mystic dimension."

To that extent, the paintings stun you. But what makes them leave an imprint in your mind is the unmistakable intensity of the artist. On canvases often spanning 5ft by 15ft, Grey has marked every form, every image with painstakingly thorough brushstrokes. There is a sense of perfection to each work that denotes a labour of love seldom found. But more than that, there is an understanding, a mysticism that transcends the conscious barriers to peep into the unknown, unsought realms and demands an onlooker to let go, to plunge deep within in wild abandon. For there alone lies beauty, truth and peace. 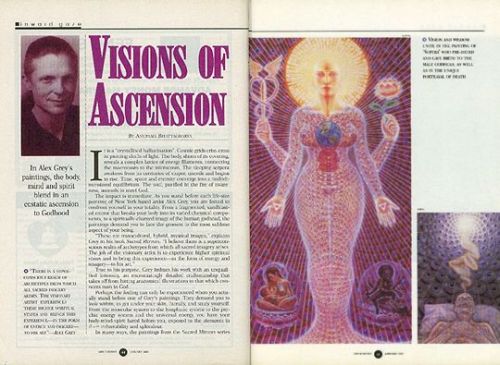