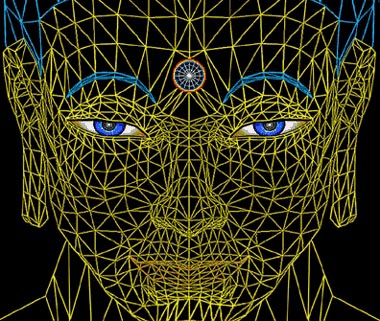 Cyberart as a Visionary Tool

Karen St. Pierre: Were you influenced by Aldous Huxley?

Alex Grey: Huxley talks about the visionary experience and how the mundane attraction to jewels is based on the similarity of gemstones to the sparkling jewel-like nature of the Heaven Worlds. It's one of the unconscious reasons for gemstones high valuation. The Revelation of St. John refers to the Holy City as "having the glory of God, its radiance like a most rare jewel", and all through the Avatamsaka Sutras there are references to jeweled Buddha fields.

Karen: The Jewel in the Lotus.

Alex: That's right. But it's not just one jewel. It's infinite jewels. Anyone who has tripped has seen them. They are alive. They are self illuminating. A jewel-like fire-fluid is the epidermis of angels. Heinrich Kluver wrote Mescal and the Mechanism of Hallucinations in 1928. It's an early analysis of mescaline intoxication and "form constants". One of the form constants, that is, "constants" of psychedelic vision, was the image of jewels and networks. I think that cyberspace luminous forms created on computer screens, seen in some far out films like Brainstorm and Lawnmower Man, are some of the closest visual analogs to subtle Sambogakaya realms. That's part of the allure and the glamorous aura of these computer worlds. Fractal geometry, visualized in infinite detail on the computer screen, has been adored and absorbed completely by psychedelic culture, because it mirrors the beautiful tapestries woven by the loom of the tripping mind. 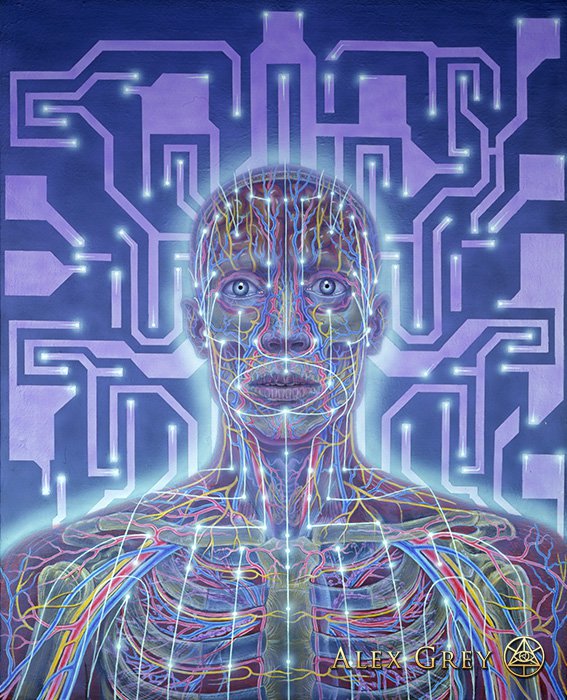 Karen: So the allure comes from the sense of light from each pixel, it's the scintilla quality of the model screen.

Alex: Yes. They are electronically based, so they glow from within. They carry their own light.

Karen: So those points of energy in themselves are mirrors of our own core of consciousness...

Alex: Or a template of a higher subtle body. Because a computer model is a mathematically based form that is protean, infinitely malleable through 3-D modeling and morphing technology, you grok the transformative capacity of form itself. Computer modeling technology is a visionary tool. One of the purposes of visionary art is to show the transformative nature of reality. Everyone wants to transform something in their lives or in their world. Any natural process or work of art that demonstrates transformation can be a metaphor that empowers ones own capacity to change. People in a jam, in a trap, in a polluted mess need to know that there is a way out. Stan Grof refers to this state of psychological entrapment as BPM2 (Birth Perinatal Matrix). Morphing cyberspace-techno art offers psychologically loaded and potentially transformative special effects.

Karen: Well, you see these effects everywhere on television. Whenever I see it I get a sense of wonder, of perhaps catching a glimpse of a higher state of being and yet it is always placed in the context of...

Alex: Exactly. The commercial use of these transformative effects to sell soap or chewing gum is an abuse because it allures the viewer by using subconscious transcendental signifiers. The consumer object won't bring spiritual transformation, but the alluring effects of its energetic glow promise that it will. You don't get any rich soul nutrition from it because sacred art cannot be made primarily for the sake of power or money. It's like using sex to sell. It has the same allure as pornography. The false promise behind pornography is love which it can never really offer. Ultimately, it leaves one unfulfilled but desiring more. The intention to sell products now dominates our visual field and this drains our urban environment of sacredness. Our visual sensitivity is numbed because of the confusing messages we are sent. Soap is sexy. Soap is sacred. Advertising is smoke and mirrors in front of incredible greed and materialism driving the marketplace. A painting can be commercial and profane or it can be healing and spiritually uplifting. The same holds true for cyberart. It's the intention of the artist that crystallizes in the work of art.

Pencils and pens were used to kill people by writing death sentences. Horrors and atrocities like Mein Kampf were penned. Does that cast aspersions on the pen or pencil? Is the computer inherently compromised because it owes its existence to a society driven by the marketplace to technologically dominate nature leaving a trail of pollution in it's wake? I still say, No. There should be no limit on the tools that an artist can use. It's the artist's responsibility whether they create works that enlighten or endarken society.

Karen: Bob Romanyshyn says that when you enter VR or cyberspace you are in the split consciousness of the dreaming ego - you can both observe and become the dreambody. He comes out pretty ambivalent on the advantages of VR.

Alex: That relates to my argument with surrealism. The landscape of surreal dream weirdness is really fun to explore but fantasy is like a labyrinth. The intentions of the artist are questionable as are the benefits of protracted exposure. The viewer never reaches transcendence. The transcendental is made visible through ideal forms which benefit and heal us, like images of health, sacrality, and the positive elements of life. Idealistic considerations are fundamental to making sacred art.

Much sacred art is based on forms that are handed down by religious tradition rather than based on personal experience. Original ideal forms are created by artists that have had mystical experiences. I talked with Charles Tart about his term "state specific sciences". This means "if you haven't been there you won't recognize the territory." My work is certainly state specific. The amazing thing is that, even though I may have received an image for a painting while tripping on LSD, another person might have experienced that same space while meditating, or during a dream or near death encounter, or even during a semi-conscious flash. The most gratifying compliment that I can receive is that my work has validated someone's spiritual or altered state experience. O my God! Look at the computer screen saver...what do you call that? a menorah? See, it's generating sacred art! Now it's a demonic owl! O my God! There's a message there. God can work through computer screens as well as pencils and bird songs. One person told me that during their near death experience they saw a tunnel of eyes exactly like my painting of "Dying". Another woman had seen my "Praying" image and heard a voice that said "Remember this image". She was going to have an operation the next day. She had trouble awakening from the operation and they had to use a defibrillator. She was confused and felt that she couldn't get back to her body. Recalling the voice and the image of "Praying", she was then able to return to her body. If I never get a good review... Here's a case where someone claims that my image saved their life.

Karen: Cyberspace and the web creates a global, non-physically grounded path of consciousnesss. Do you see a connection with the way your art visualizes consciousness and energies beyond the immediate physical?

Alex: Lovelock describes "Gaia" as the living planet composed of many eco-systems. De Chardin talks about the noosphere, the collective consciousness of all living beings. I call it World Spirit, the force that connects all beings and things on earth on every level from the physical to the spiritual. My work is inclusive, planetary, and not limited to one sacred tradition or culture. The Internet and the World Wide Web are metaphors of unlimited interconnectedness celebrating an appreciation of world culture and a spirit of tolerance. The World Wide Web evokes imagery of the Jewel Net of Indra. In the abode of Indra, the Hindu God of Space, there is a net that stretches infinitely in all directions. At every intersection of the net there is a jewel so highly polished and perfect that it reflects every other jewel in the net. My wife, Allyson's work is based on the Jewel Net image which came from an experience we had while tripping together. 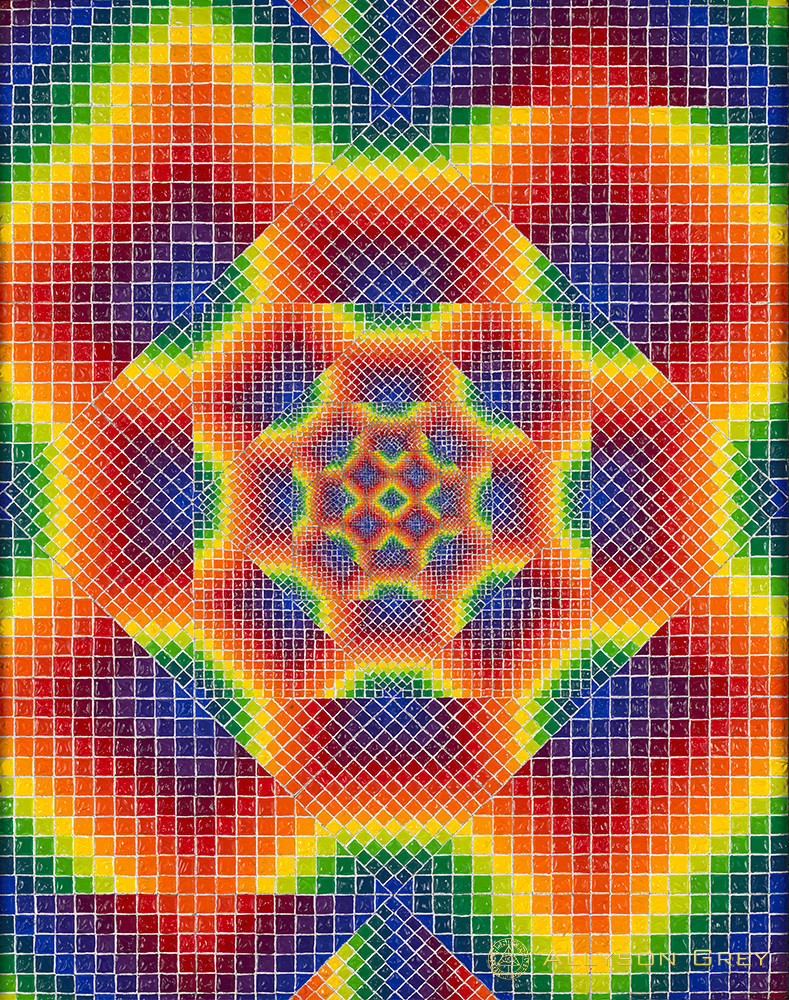 I refer to that experience as "Universal Mind Lattice", an infinite omni-directional net of fountains and drains of superconscious light connecting everyone and everything. The metaphor behind the WWW or the Internet is a global brain with an infinite variety of user neurons, or nodes in the network. But, there is a profound difference between access to unlimited amounts of information provided by the Internet and the experience of higher consciousness. Access to information provides a horizontal broadening of intelligence, but the mystical experience is a vertical deepening and heightening of inner meaning.

Karen: There is a mystical sensibility about what is being put out about the future of the Internet.

Alex: That may be due to the psychedelic diet of some of the people who are advanced technonauts. Probably alot of people in the computer world have tripped and transferred their zeal for higher consciousness onto projects in cyberspace.

Karen: Is that mystical zeal delusional, a confusion of intentions?

Alex: Perhaps. The Internet connects us intellectually on the computer screen, this is not a mystical experience, yet. Any large computer based project requires vast sums of money to develop, so you get mammon's edge to it. The intentions of hardware, software, and media developers are not simply to do research and create. The intention is to make money, not just spend it. They are trying to make something that will beat everybody else. There's an incredible ego power trip involved and the desire to be famous and rich. Of course, those are the intentions that cloud any world. If you look in People Magazine and at Entertainment Tonight, people want to be rich and famous. That's the American dream, capitalism and glamour. Democracy is dead, the influence of money and fame as ultimate values has seen to that.

So, in the inherently compromised Ubercapitalist cyberscape is it possible to create supernal, numinous, dare we say, sacred art? I don't think it's impossible. The bodhisattva, Avalokiteshvara would go into any hell realm, even if it's computer based, as a messenger of hope and deliverance planting the seeds of enlightenment where it's most fucked up. If you can grab the super computer tools with the strong intention of creating sacred art, I'm sure you can make glimmering jewels of the numinous in cyberspace.