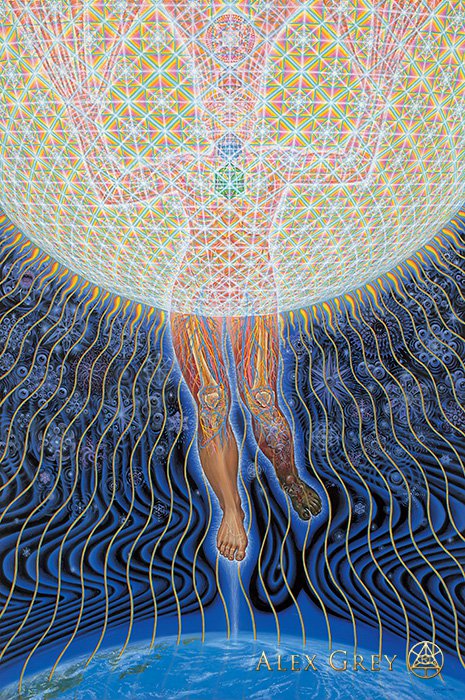 Feature Inc.: Are your paintings generally based on visions?  How do you flush out the details - are you able to remember all that or do you return to the vision to inspect it?

Alex Grey: Yes, my works are based on visions. Let's take a piece on view at Feature Inc., Transfiguration, here's what happened leading up to doing the painting.  Early one morning I woke from a dream.  In the dream I had been painting a piece called Transfiguration.  The painting had a simple composition, two opposing spherical curves connected by a figure.   Floating above the earth sphere, a human, which was fleshly at the feet became gradually more translucent.   At about groin level it "popped" into a bright hallucinogenic crystal sphere.  This inspiration provided by the dream, was underscored later that week when I smoked DMT.  As I inhaled the immediately active and extremely potent psychedelic, I became the transfigured subject of my painting.  In my vision, my feet were the foundation of the material world.   As I inhaled, the material density of my body  seemed to dissolve  and I "popped" into the bright world of living geometry and infinite spirit.  I noticed strange jewel-like chakra centers within my glowing wire-frame spirit body, and spectral colors which were absent from my dream painting.   I was in my future painting and was being given an experience of the state in order to better "re-create" it.

Feature: How does illustration and the illustrative work for you?

Alex: The word illustration means, "to make clear and distinct, to explain."  Yes, I am clarifying my mystical experiences and visions with my paintings.  All art is illustrative.  Artists, dealers, critics, historians or viewers tell a story about the art and artist and that narrative becomes associated with the work.   The narrative clarifies the art and the art illuminates the narrative.  Pollock's work illustrates a historic breakthrough technically and compositionally, as well as being loaded, like Rothko's work, with tragic and metaphysical portent.  Judd and Stella's early work illustrates the Minimalist esthetic (amongst many other things).

The terms illustration or Illustrative have become pejorative, and a convenient way for some art folks to refuse to think about the possibilities of painting with content.  If a work of art can succeed formally, then why dismiss the work because of itÍs enlarged scope which includes content?  The aesthetic experience requires one to suspend their prejudices and open themselves as fully as possible to where the artist is coming from.   Content is unavoidable and imperative for the survival of art. If you are talking about the field of illustration, then I would say that an illustration is a work of art that some art director has commissioned to explain or be associated with a product or idea in the media.  In that case, the term does not apply to my work.  My painting is not commissioned nor done in response to what would sell.  Years ago. an art dealer I know told one of his painters to make work like Ross Bleckner because he could sell the pictures.  The poor artist did it too.  Was this illustration? 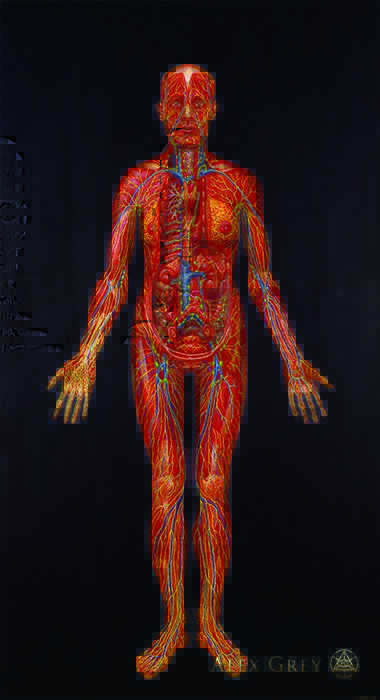 Feature: How did you come to use the x-ray device?

Alex: I've always been obsessed with anatomy, I was drawing skeletons when I was five.  In 1978 I had a vision that  was a breakthrough for my work, I was standing in front of a full length mirror and saw through my skin and saw all the energy surrounding and interpenetrating my body, working through it like acupuncture meridians and chakras.  It was a fusion of East and West, science and spirit that pointed out how my work could become more integral, by including dimensions of reality we know or feel exist, but don't commonly see.

Feature: Do you have any special take or comment on a relationship between the electric/electronic and the spiritual?

Alex: I think most people agree that computer animation holds great promise for modeling the tripping and visionary states of consciousness in a time based medium.  This could be translated into video works, flash animations, or cinematic spectacular events.  I'm interested in bringing my work into those mediums, too.  I just finished working with the grammy award winning rock group, TOOL, on a music video where an "Alex Grey, X-ray type figure" dissolves into a grid of light.  Some cinema and light shows are evocative of highly organized mystical realms.  The psychedelic subculture of the Sixties has blossomed into a digitally reconfigured trance culture of the 21st century.  As the technology grows more complex and cheaper and artists become more transcendently motivated, we're going to see more inventive translations from the "Divine Imagination," as Blake would call it, into our media, and that can catalyze a person's transformative potential, just like sustained viewing of a painting can.
Visit: Chapel of Sacred Mirrors
46 Deer Hill Rd
Wappinger, NY 12590 USA
Phone: (845) 297-2323