I first came across your art from the TOOL album you did and then later Nirvana's album and the Beastie Boys, at once becoming an admirer of your art forever. Could you tell us a bit about that experience and explain what transpired creatively between you and the bands?

Alex Grey : Nirvana's manager requested the use of one of my paintings entitled "Pregnant Female" for the "In Utero" album. I never met Kurt Cobain but heard that he admired my art and promised to come to the studio the next time he was in New York. Then he died.

Adam Yauch called asking to use the "Gaia" painting on the "Ill Communications" album. We spoke a few times on the phone and had lovely conversations when we ran into each other at Buddhist ceremonies and speaking engagements of His Holiness the Dalai Lama. 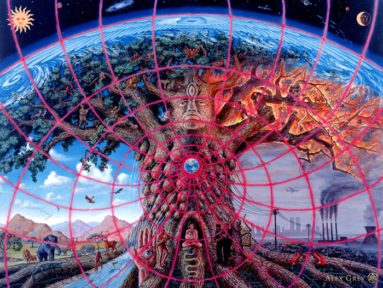 I had a solo exhibition in Santa Monica and Adam Jones, lead guitar and founder of Tool, inquired with the gallery about my artwork and started talking immediately about album art. He described his concept of the dissectional art for the Lateralus album. He asked me to conceptualize a stage setting using my work to travel with the band on 90 city tours of stadiums throughout the world. It was astonishing the exposure that my work received through our interaction for the past two albums. I also had the opportunity to create and co-create my first two animation projects.

In your new book, Net of Being, their is a section about your relationship with the band TOOL. What can you tell us about your experiences with Maynard and his band TOOL when it comes to this partnership with them artistically?

Alex: Actually, it is my understanding that the lead guitarist, Adam Jones, founded the band Tool. Adam saw my work at a solo show in Santa Monica and we struck up a relationship that has resulted in the exposure of my work to literally millions of people worldwide. It has been a wonderful and life altering experience for which I am very grateful. Allyson and i have had a wonderful relationship with Maynard, Danny & Justin, too.

Alex: Allyson and I like to say that art is our religion. Art is the oldest living religious tradition and embraces all sacred paths. Every great wisdom tradition has manifested sacred art in many disciplines -- paintings and sculpture, architecture, performance, dance, music, wisdom writing, poetry... We believe that every day is a good day when we paint. 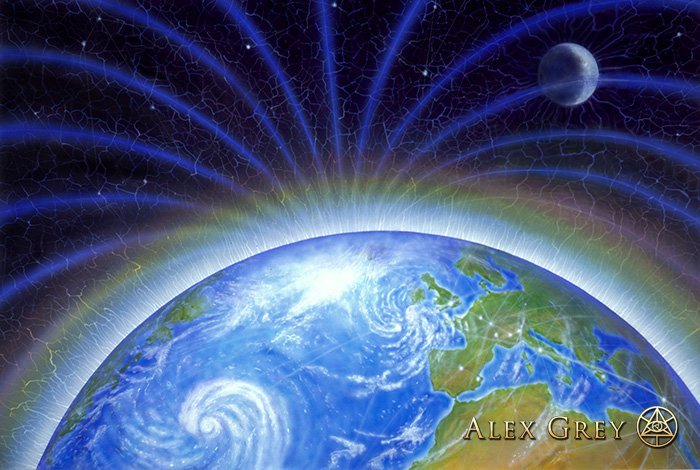 In your art, like an eagle eye view from the intelligence of the Universe, you have applied multi-dimensionality to important moments of human life such as praying, meditating and birth. What are your thoughts on creation and other life in the Universe?

Alex: Some of my paintings portray an x-ray view of the human anatomy including the light body -- acupuncture meridians, auras, chakras, prana, thought forms, symbols, archetypal vortices, the light that shines beyond the flesh.

Other life in the Universe? Probably. Evidence does not establish this with certainty at this time, but science may be close to verifying life outside of earth. What degree of intelligence is perceptible by humans is another question. Our planet could be a thoroughfare for aliens operating on a different channel, for all we know. . interdimensional entities that pop up within the realm of our mind? Definitely.

I saw your recent 2013 Calendar and have to say your art mixed with a Calendar is very uplifting and just grand. How did you go about aligning your art with the months of the Year process wise?
Alex: So glad you enjoyed the calendar. We've published a calendar for maybe a decade with Amber Lotus, one of the largest U.S. calendar publishers left. They are wonderful sensitive people, and they propose the images from those already published in books. 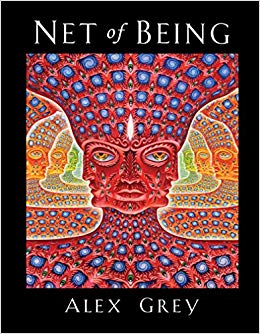 Your upcoming book Net of Being is described as follows: "His painting "Net of Being--inspired by a blazing vision of an infinite grid of Godheads during an ayahuasca journey--has reached millions as the cover and interior of the band TOOL’s Grammy award–winning triple-platinum album, 10,000 Days." Could you tell us about this and the role of Ayahuasca in this process of creation?
Alex: Ayahuasca and other sacramental entheongens -- LSD, mescaline, psilocybin, and DMT are capable of catalyzing a visionary mystical experience. The visions that people encounter during these journeys are often deeply symbolic. The origin of all world religions and sacred art traditions is a mystic visionary state. Moses encountered a Burning Bush and heard the voice of God. An angel came to Mary to announce the coming of the holy child growing in her womb.  Mohammed rode on the back of Barach, a flying mule, to the seventh heaven. The discovery of the transcendental realm at first astonishes us and then compels us to share that revelation with others. The ability to transmit mystic states through art is why visionary art matters.
Tool gave the Net of Being icon a launching pad into the cultural meme stream.

Alex: The book follows an arc of expanding interconnectedness starting with one self, the self in relationship to a partner, to a family, a community, World Spirit and Cosmic Creativity. These are nested shells of identity. 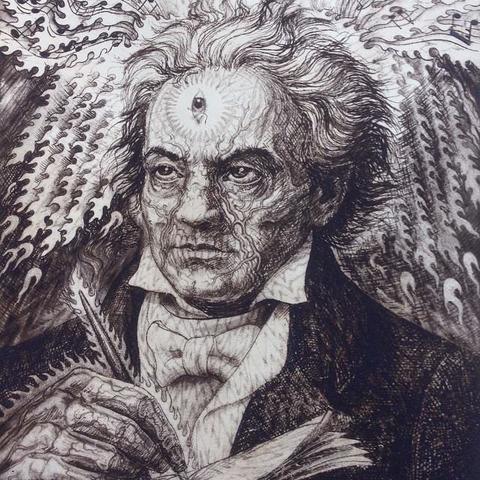 What music, films and books do you find comforting, inspiring and that resonate with your being?

Books:  Alone with the Alone by Henri Corbin on Ibn Arabi
No Two is Peace by Adi Da
The Integral Vision by Ken Wilber
Evolutionary Enlightenment by Andrew Cohen
Self Liberation Through Seeing with Naked Awareness John Reynolds translation of Padmasambhava text
Foundations of Tibetan Mysticism by Lama Govinda

These books have been very helpful to Allyson and I:

The preface of Net of Being. offers your reflection on the concept of "meme":  "A meme is a parcel of cultural meaning, a shared value, a trojan horse for a worldview. Transmission of a meme often occurs through iconography. The journey of a visual meme through the cultural body presents an icon vector, the wake of an image through time and the collective mind. Art is a consciousness evolutionary tool because of its ability to transmit memes."
I hear the word "meme" a lot in the paranormal and conspiracy scenes like the Zombie meme or the Vampire meme or the Alien meme -- representing a darker connotation. I like your more positive view of the meme. What are your present thoughts on art and conciousness when it comes to the meme?

Alex: The word "meme"was coined by world renowned atheist, Richard Dawkins, to describe a parcel of meaning, like a gene is a parcel of information in our DNA. The word itself is unrelated to a dark or light connotation. The zombie meme is a projection of our fear of becoming mindless consumers. The vampire meme refers to the 1% who suck the energy out of the life force. The alien meme addresses the fear of invaders, those would threaten our freedom and power. The most important memes for our culture today is consciousness evolution, environmental sustainability, and memes that influence people to love each other. 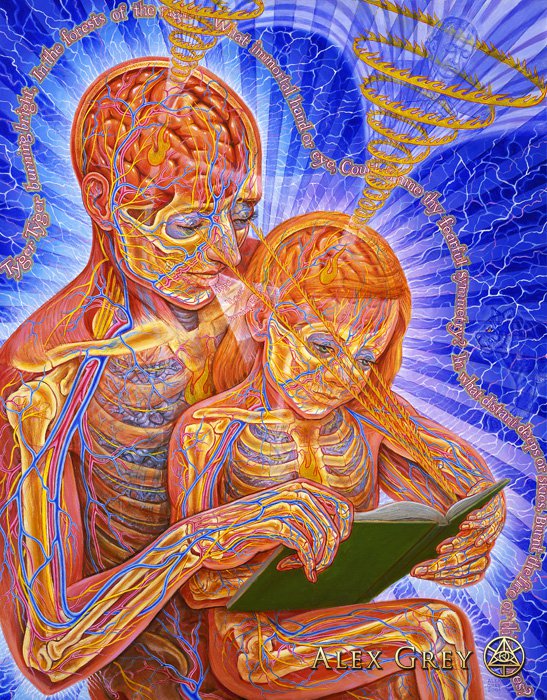 What projects and events are next for Alex Grey and Allyson Grey?

Alex: Allyson and I co-founded CoSM, a creative and spiritual center in the Hudson Valley, New York. For eight years, CoSM has held an unbroken chain of Full Moon ceremonies, to celebrate the "high tide of the soul." We hold Art Church monthly on a Sunday afternoon with art meditation and uplifting "edu-tainment" -- a speaker, musicians or spiritual film. Solstice and Equinox celebrations feature an uplifting program followed by electronic music, dancing and dance performances, a fire circle and fire spinning... Halloween and New Years celebrations are very popular events at CoSM.

At CoSM, Entheon is the Sanctuary of Visionary Art now under construction. "Entheon" refers to "a place to discover the God within." The first exhibition at Entheon will be the art of Alex Grey including all twenty-one Sacred Mirrors. When the Chapel of Sacred Mirrors is built, [target date 2020] the Sacred Mirrors and other works will be installed there and Entheon will feature visionary creativity by many artists. Entheon will be a three story public structure complete with an elevator, bathrooms, parking, a paved road with lighting... New technologies in 3D modeling and printing will be utilized to create the sculptural elements of this architectural design.

Entheon will be an enduring legacy manifested through the contributions of many visionaries from all over the world, truly a global sacred site.  We ask for support and assistance of all kinds from the community. If visionary art has made a difference in your life, we urge you to support CoSM by joining us for events, purchasing CoSM products, becoming a member, volunteering and by making a generous donation to perpetuate CoSM.
Visit: Chapel of Sacred Mirrors
46 Deer Hill Rd
Wappinger, NY 12590 USA
Phone: (845) 297-2323