Alex Grey is an artist who straddles an unusual cultural rift. On the one hand, he's widely known as a visionary, shaman, author, and an advocate of the reasonable use of entheogenic substances (psychedelics). He's met with Tim Leary, Terence McKenna and Albert Hoffman, the discoverer of LSD. As a painter his work has appeared on album covers, in numerous museum and gallery shows, and is avidly collected by a discerning group of enthusiasts who prize his virtuositic technique and hallucinatory content above fashion statements and art world trends. These excerpts are taken from an interview that took place in Grey's studio loft in Brooklyn, surrounded by his work as well as the intriguing eye vibrating paintings of his wife Allyson.

James Kalm: I'm curious about how long you've had your web site, and what got you involved in doing things on the web?

Alex Grey: Well a couple of friends approached me and they had a web site and "New Media" company out in California. They suggested that I might have a web site, post some of the artwork, and create a way to inform people about this project, the "Chapel of Sacred Mirrors" that my wife and I have been working towards for a number of years. It's a sort of interdenominational chapel to house contemporary sacred art, specifically the series called "Sacred Mirrors." We wanted to have a way that people could find out about the project and be informed from all over the world. Since we were already working with e-mail anyway it seemed that it would make sense to have a web site. It would also be a way to inform people about the book "Sacred Mirrors," and, you know, some little products like posters and other kinds of things.

James: How's the response been?

Alex: Every day we get orders, as far as that goes. Actually we're working on revamping it because it's been up for two years with only minor adjustments, and after two years, a lot of technology has been developed.

James: What do you see as the future of art on the Internet, or artists working or promoting their work on the net?

Alex: Well I think artists are there because everybody who has a "product" or service or organization is there. It's like hanging out a shingle in the largest shopping mall in the world. The problem is directing people towards your shingle. There's a community that has to develop that would have an interest in your work. If it's not fired by the critical press, then you've got to have another way of stimulating an interest. I know a number of wonderful contemporary artists that don't have web sites, and some that don't own a computer at all. Their work travels through the museum, gallery, and auction house net works so there's no real need to bother with it. It's absolutely not necessary for your success in the art world. I think that frankly it's probably made it easier for more alternative visions to promote themselves and affiliate with each other. There're all kinds of subterranean communities, like the psychedelic community, which have huge numbers of web sites with incredibly fascinating content. They are a kind of outlawed or black balled social group in conventional America, but on the web there's a presence and reality that equalizes their status.

James: The Internet could be an analogous concept to your idea of the interconnected cosmic consciousness.

Alex: I think that metaphorically it's had a tremendous impact on the consciousness of humanity. Television has altered the way that we think about life, radio as well. I remember going to the Nam June Paik show and there was a questionnaire that he created in the sixties. One of the questions was "How long will it be before every artist can have his own channel?" With the web the answer is the year 2,000. With TV you access waves that are going through the air, with the web it's a network. It's a potent medium that's tuning people to the idea that we're all interrelated. The Internet is in some ways akin to Teilhard De Chardin's notion of the "Noosphere," which he wrote about in the fifties. He predicted a technological advance that would cover the globe and become the thinking layer of the planet. The Internet is not the spiritual web, it may be an aspect of it but we can't confuse it with the "Theosphere."

James: Getting back to the more practical side of the net, I'm interested in it's ability to give artists a way to transcend the elitist critical media. Do you see it as a way to get past the New York "Art Mafia?"

Alex: Absolutely, there's not just one art world any more. We kind of think there is, but perhaps this is how we were educated in art school. With the advent of Postmodernism and the whole notion of multiculturalism, the sense of the overarching correctness of the "White Male European American" dominated art world has been ground down.

James: Where do you see yourself as fitting into the "Artforum" view of the world.

Alex: There are a number of contemporary artists that are working with themes that I'm working with as well. I don't see myself as so totally unique of anything. There's Kiki Smith, an old friend. She's known my work for a long time. I've worked with human anatomy for as long or longer than she has, though certainly not with as innovative materials. In my work I've tried to add a more spiritualized view of anatomy. Bodies are glowing, acupuncture meridians and cakras and various Tantric systems are used. I've tried to weave in the western mode of anatomy, the eastern sort of life energy and the Asian notions about what makes the body work. Basically I'm trying not to portray the body. I'm trying to portray consciousness. In the psychedelic area, people like Mariko Mori or Fred Tomaselli are working with visualizing what the contemplative mind, that is entheogenicaly inspired, may be seeing. 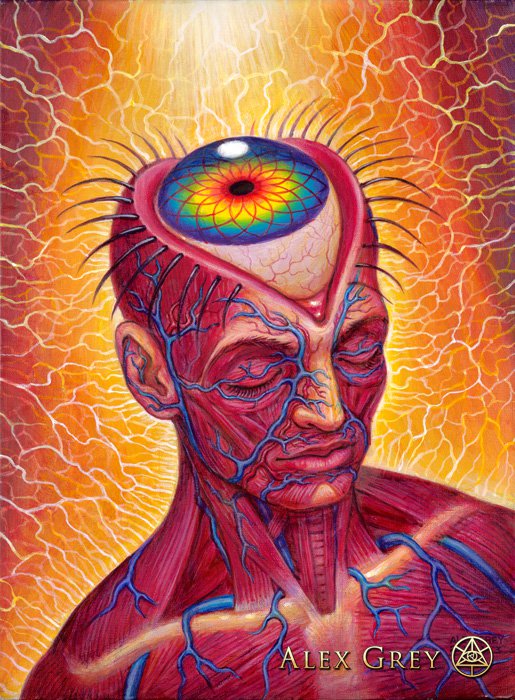 Alex: Psychedelics. I think there's an entheogenic art that's emerged, or at least the entheogens have informed a visionary type of art. Francesco Clemente has always hovered in this kind of spiritual figurative painting.

Alex: Yeah, he's a friend. He's a good friend. He's living in Majorca. He's an amazing painter. I saw him about a month ago. A lot of his work is available to be seen on the web. There's a whole realm of what's been called visionary painters, like H.R. Giger, who everybody knows from "Alien" and things, though practically no respectable New York gallery will show his work, nor Klarwein, nor Ernst Fuchs. Some of the greatest painters of the twentieth century are not seen in America.

James: I've always loved these peoples work. Do you see the New York art world opening up, becoming a little more receptive to some of these fantastic painters?

Alex: They've never been given respect in America. It was the era of "Pop Art" in the sixties when they were doing some of their finest works. My work is related in that I would call it visionary, but visionary is such a huge word for me. It incorporates things like surrealism, and the fantastic, and the art of the insane, and the primitive. Every culture, every sacred culture, draws from this kind of visionary domain. As far as whether New York is ready, well there are folks like Alexis Rockman and Gregory Gillespie who are having great shows.

James: I was sorry to hear about Gillespie's recent death.

Alex: Oh horrible. They're having a memorial show that's up for another week.

James: I'll have to get up to see that.

Alex: I think that it behooves a large institution like the Met or the Brooklyn Museum to do a well researched well curated show of the visionary phenomena as it occurred. This has been an on going and undervalued western tradition. I call it the "Bastard Tradition."

James: Why do you think that the upper echelons of the art critical world have never accepted visionary art?

Alex: The Holy Grail of Abstract Expressionism kind of killed the last hurrah of the Symbolists and the Surrealists in the forties. Pavel Tchelitchew is one of my favorite painters. His great work, "Hide-and-Seek," was one of the most admired and loved paintings at the Museum of Modern Art. His is a fascinating story because that painting, "Hide-and-Seek," was second only to "Christina's World" in its appeal. David Wojnarowicz credits that painting with inspiring his life as an artist. Numerous other artists have been inspired to become artists by looking at that painting. Now that's an incredible, incredible thing. What did they do in the eighties but took it away and hid it. It no longer fit the trajectory of art history that the Modern was going to stand for.

James: It's kind of like the communists, the Stalinists, airbrushing out Bukharin and Trotsky and rewriting history.

Alex: That didn't happen, or at least it wasn't important enough to note. In the twentieth century if you were going to get spiritual it had to be abstract. That was the bottom line, and that was the line that I crossed and some of these other artists crossed.

James: Getting back to the psychedelic stuff, you were involved in a psychedelic conference on Maui a couple of years ago with Terence McKenna. I read an interview with him some years ago in which he stated that the world was controlled by giant space spiders who were orbiting the planet and when he partook of his favorite entheogenic, DMT, he would commune with the spiders. Was he just trying to pull our legs or what?

Alex: No. I don't think he was pulling everyone's legs. I think that was his legitimate experience and I think that it related to the shamanistic view that that there are levels and dimensions, or realities that we have no awareness of. We were talking before about the biosphere and the Noosphere, these beings that he was talking about are part of the Theosphere. The God network. These are beings that are noncorporeal, yet have influence on our consciousness, and perhaps other things like the flow of disease, drought, or famine. You cannot reduce the inner universe to the outer universe. They are irreducible, and part of the purpose of our being here, I think, is to realize our oneness with the cosmic life, and the cosmic creativity. I think the mission of art is to ask those unanswerable questions. I feel like the fantastic realists, and the visionary artists represent what Blake called the divine imagination. 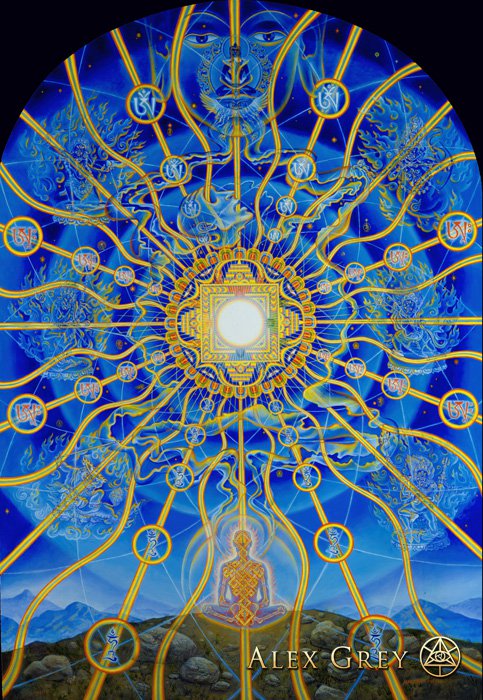 James: Do you still get high? Do you believe that entheogens will be a continuing part of your life?

Alex: I'm not a willy-nilly advocate of all drug taking by any means. There should be appropriate set and setting like we learned in the sixties, to enhance the sacred dimensions of one's consciousness. With the appropriate surroundings, one can catalyze this mystic vision inside, and for some artists it's been very important. Keith Haring credited his whole style to acid trips he took when he was fifteen years old. He felt like he had discovered God and a way of working that evolved into a very significant body of work. Clemente visited Albert Hoffman thanking him for the visions.

James: But there are ways of attaining enlightenment or a different perception of reality that don't require drugs.

Alex: Yes, absolutely. Something that Huston Smith said that I admire is the idea to "Move altered states into enduring traits." He also said that it's proven that entheogens can induce a religious or a spiritual experience. What's not proven is whether they can help a person lead a spiritual life.